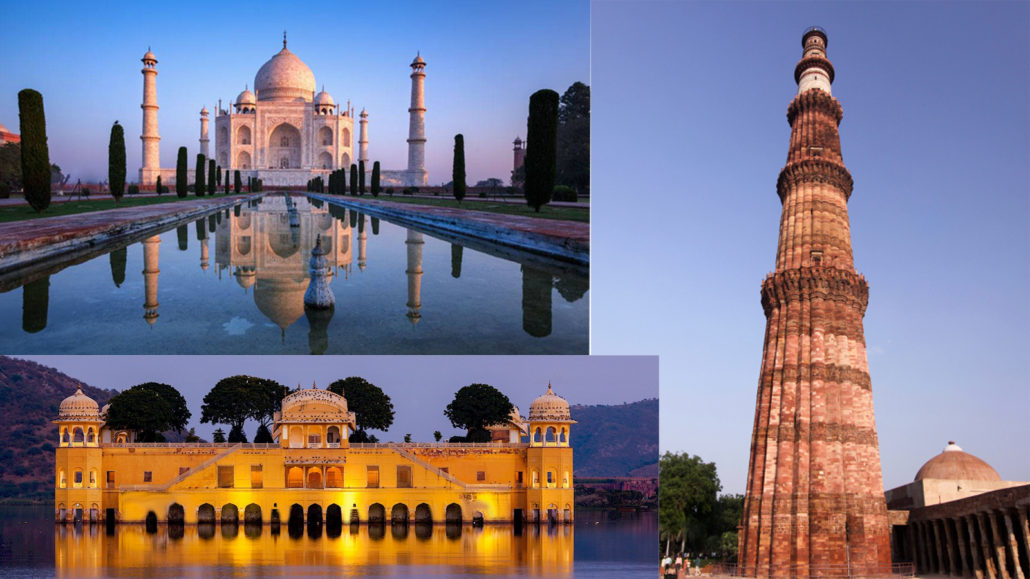 The Golden triangle is a tourist circuit in the heart of India that comprises of the three cities Delhi, Agra and Jaipur that almost forms an equilateral triangle on the map. The circuit is described as ‘Golden’ because the three cities are rich in historical and cultural splendour.

Delhi is the national capital and boasts of various historical influences in its monuments and culture- from the Mughals to the Marathas to the British. From historic forts, magnificent buildings, medieval tombs, temples, mosques, bustling markets, quirky galleries, lip-smacking street foods, Delhi has much to offer.

Agra is home to the single most visited place in the subcontinent, the Taj Mahal – known as a modern wonder of the world and is located in the state of Uttar Pradesh.

Jaipur, known as the pink city, is the capital of the state of Rajasthan as is most famous for its Rajput legacy, opulent palaces, magnificent forts and colourful markets.

Together, the three cities can give you a glimpse into the history of India, the eclectic cultures that have lived here and the influence of it in today’s modern life.

The summer months are April-June and the heat can get excruciating and travel is best avoided at this time of the year. The monsoon season lasts from July to September. Autumn months October-November and Spring months February-March see pleasant days, cool nights and low humidity. The winter months of December and January may see chilly winds and cold waves leading to frost.

The best months to visit the Golden triangle are between October and March that is relatively cool and dry when temperatures remain pleasant at 8°c-24°c.

The official language of all three cities are Hindi, though native languages are also spoken. English is widely understood and spoken in all these areas.

Highlights of the itinerary:

Ready for an adventure? Take a jeep safari through the jungles of the national wildlife reserve and spot tigers, leopards, marsh crocodiles and countless other animals in their natural habitats.

Take a spiritual detour. A dip in the sacred Pushkar Lake or a walk along its Ghats and visit the ancient 14th century Brahma temple.

Visit the sacred dargah (shrine) of the famous sufi saint Moinuddin Chishti, a place which attracts lakhs of pilgrims every year.

Note: All itineraries can be curated to suit your requirements.